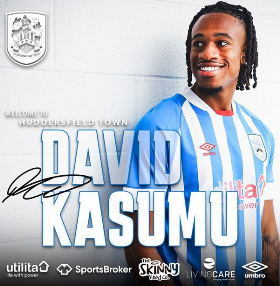 Through a statement on their official website, Championship club Huddersfield Town have announced the capture of former Nigeria U15 invitee David Kasumu.

A central midfielder by trade, Kasumu has put pen to paper on a three-year contract with the Terriers, with the club having the option of an extension into the 2025-2026 season.

The highly-rated youngster arrives at The John Smith's Stadium from Milton Keynes Dons, for whom he made ninety three career appearances.

The 22-year-old scored two goals and set up five others in 5,986 minutes of action for MK Dons.

Although Kasumu joined Huddersfield Town as a free agent, MK Dons are due compensation as he was offered a new contract and he's an U24 player.

Commenting on the transfer of the Nigerian, Head of Football Operations Leigh Bromby told Huddersfield's official website : "We’re delighted to welcome David to the Club, as he is a player who has been on our radar for a long period.

"His qualities are exactly the ones we look for in one of our central midfield roles within our game model. David brings fantastic energy to the pitch, can carry the ball well and has great defensive instincts too.

"When we met him, it was very clear what a great attitude he has; he shares our ‘Terrier Spirit’ when it comes to hard work."

Kasumu could make his competitive debut for Huddersfield Town when they take on Burnley in their opening match of the new Championship season on July 29, 2022.