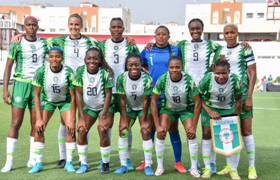 The Super Falcons will lock horns against Botswana in the second group stage game of the African Women Cup Of Nations tomorrow Thursday, July 7th 2022.

This will be the Super Falcons second game of their title defence after Randy Waldrum's women lost their opening match to the Bayana Bayana of South Africa with a 2-1 scoreline on Monday.

Allnigeriasoccer.com has all the information you need ahead of the crunch match between the two countries.

Nigeria's Super Falcons will be looking to get a win to kick-start their run in the AWCON and will be eager to put their recent loss behind them to get the three points.

A win over The Mares would help put Nigeria's qualification into the knockout stage back on track after a disappointing loss to South Africa. However, Botswana won't be an easy opponent.

Debutants Botswana beat Burundi in their first fixture in Morocco with a 4-2 scoreline. Another victory for Gaoletlhoo Nkutlwisang's women will send them into the quarter final.

After a disappointing loss to South Africa, a front foot game should be expected from the Super Falcons. However, with Botswana recording such a dominant and confidence boosting victory against Burundi, it could be a slippery slope for Nigeria to balance their will to win and making sure that they do not lose their structure by over committing.

Super Falcons coach Randy Waldrum favours an attacking set-up with the former University of Pittsburgh women's head coach reiterating his desire for Nigeria to be recognised as the team to beat in all competitions whilst recognizing the need to improve on key areas after the loss to South Africa.

His tactics also need to be spot on as this game could decide Nigeria's fate in the tournament.

Botswana coach Gaoletlhoo Nkutlwisang utilizes a 4-4-2 as was displayed against Burundi with emphasis laid on ball progression through the lines and a lot of long-range shots when the chances present themselves.

Fans can expect an attacking game of football with both teams eager to open the goalscoring.

The African Women Cup Of Nations group stage match between the Super Falcons of Nigeria and Mares of Botswana will kick off at exactly 2100 hours Nigerian time at the Stade Moulay Hassan, Rabat.