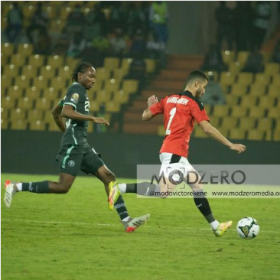 Allnigeriasoccer.com can exclusively report that Spanish Segunda División club SD Ponferradina are in talks with Nigeria international Kelechi Nwakali over a transfer this summer.

The former Arsenal midfielder is on the look out for a new employer after his acrimonious departure from SD Huesca in April 2022, upon his return to Spain after representing Nigeria at the 2021 Africa Cup of Nations.

SD Ponferradina's Portuguese football tactician José Manuel Gomes has identified Nwakali as a priority signing ahead of the forthcoming season and contract negotiations are going on smoothly.

The 2015 U17 World Cup Golden Ball winner was heavily linked with a switch to FC Zurich but the proposed deal has stalled as of now as a result of a change of coaching personnel at the Swiss champions.

Manager Andre Breitenreiter has been poached by German club Hoffenheim, so it is now up to the new FC Zurich coach Franco Foda to decide whether or not to continue talks with Kelechi's camp, contrary to speculations that the deal fell through because of his wage demands.

The Super Eagle is currently in the nation's capital Abuja but is expected to return to Owerri in the next few days.

Ahead of a move this summer, Nwakali has been keeping up his fitness by training with Papilo FC, owned by Arsenal legend Nwanko Kanu, and he has also been spotted working out with his former grassroots club ASJ Academy.

Apart from SD Ponferradina and FC Zurich, the former Golden Eaglets and Flying Eagles captain is on the wishlist of an unnamed Swiss Super League side.