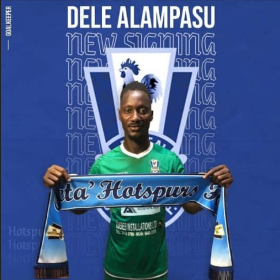 Maltese club Pietà Hotspurs F.C. have announced through social media that they have secured the services of 2013 U17 World Cup-winning goalkeeper Dele Alampasu on undisclosed terms.

The length and financial terms of the contract he signed with Hotspurs have not been disclosed by the club.

On his curriculum vitae, Alampasu lists Feirense,  Cesarense, Ventspils and FS Jelgava as his previous clubs.

Pietà Hotspurs F.C will be competing in the Maltese Premier League in the forthcoming season after securing promotion back to the topflight in April 2022.

Alampasu will work under manager Rodney Bugeja and his assistant Joseph Farrugia in the new season.

Since landing in Europe in 2015, the 25-year-old glovesman is credited with eighteen appearances combined for his European clubs, with fourteen coming in the colours of Latvian outfit Ventspils.

He played for Future Stars Academy and Abuja Football College in his homeland before his move to Europe.