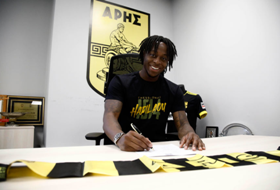 Through a statement on their official website, Greek Super League club Aris Thessaloniki have announced the signing of 2014 Nigeria U23 invitee Moses Odubajo after passing the necessary medical tests.

The fullback has inked a three-year deal with Aris Thessaloniki, joining them on a free transfer after turning down a new contract at Queens Park Rangers.

Odubajo's move to Aris Thessaloniki has ended his eight-year association with Championship clubs.

Predominantly a right back, he notched 16 goals in 116 appearances for Leyton Orient prior to his move to the Championship in 2014.

In his first words as a player of Aris, Odubajo told the club's official website : "I can't wait to live the experience with Aris.

"I am excited about the new page that I am opening in my career and the perspective of Aris.

"It's the first time I'll be playing outside of England and I'm really looking forward to the experience with Aris."