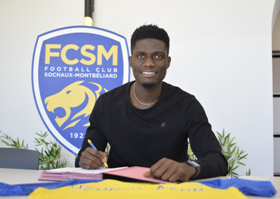 Ozornwafor has joined Sochaux on a season-long loan from Royal Charleroi Sporting Club, with an option to buy inserted into the agreement.

By joining Sochaux, he becomes the fourth Nigeria international to be acquired by the Montbéliard club, after Wilson Oruma, Brown Ideye and another defender, winner of the Coupe de France in 2007, Rabiu Afolabi.

Ozornwafor spent the whole of last season on loan at Sporting Charleroi, playing seventeen league games including sixteen as a starter spread across 1,399 minutes.

Sporting Charleroi triggered the purchase option it had at the end of the 2021-2022 season.

The left-sided centre-back moved to Galatasaray after the 2019 FIFA U20 World Cup and was immediately loaned out to Almeria in LaLiga 2 to learn about European football.

Ozornwafor is not lacking fitness as he was involved in Sporting Charleroi's pre-season preparations before heading to France.