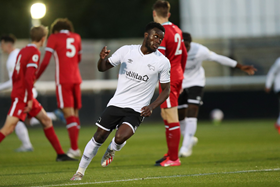 According to Cologne dedicated online newspaper GEISSBLOG, Shonibare featured as a trialist for Cologne U21s in their 4-0 loss to Chelsea's development squad in a pre-season friendly on Saturday, July 9.

The 24-year-old is on the lookout for a new club following his release by Derby County.

Per the report, it is claimed that Shonibare's performance against the Blues youngsters wasn't remarkable and he is unlikely to be signed by the Billy Goats.

He was much less noticeable than another trialist Kimbyze-Kimby Januario.

He received two call-ups for the first team, against Norwich City in the Championship and Barrow FC in the Carabao Cup in the 2020-2021 season, during his spell at the Pride Park Stadium.

German-born wing-back of Nigerian descent Derrick Abu was among the scorers for Chelsea in the win versus Cologne U21s.