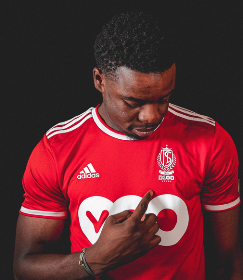 Ohio is now tied to the Belgian Pro League side until June 30, 2026 after putting pen to paper on a four-year contract.

Born nineteen years ago in Almere in the Netherlands, Ohio began his footballing education at the local club before moving to England where he continued his development with Manchester United and Manchester City, from where he switched to RB Leipzig in 2019.

Ohio was loaned out to Austria Vienna for the whole of the 2021-2022 campaign and before then spent six months at Vitesse Arnhem.

He decided to join Standard Liege because of their project and is looking forward to putting his qualities at the service of the Reds.

In thirty five appearances as a professional, the talented attacker has been involved in eight goals (6 goals, 2 assists).

For the upcoming season, Ohio will be wearing the number 10 at the back of his jersey.

He is also eligible to represent England at international level and has featured in some non-binding games for the Young Lions at U16 level.