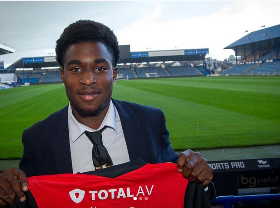 Allnigeriasoccer.com now has confirmation that a player of Nigerian descent is among the new batch of young players that signed apprenticeships with Pompey.

Destiny Ojo put pen to paper on his contract in a ceremony at Fratton Park before posing for photographs inside the stadium.

Ojo has joined Portsmouth as a second year scholar after catching the eye of the youth team coaches during a trial period.

He has been described by Pompey's Academy manager Greg Miller as an imposing attacker with a strong physical presence and has shown a good level of consistency in his finishing.

Miller added that Ojo uses his physical capabilities well to pressure opponents into mistakes and works really hard for the team when they are out of possession.