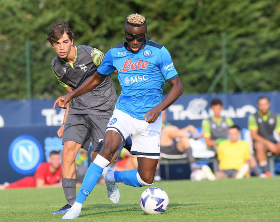 Italian Serie A side Napoli began their pre-season friendlies with a goal fest on Thursday, thrashing Anaune Val di Non, a team that compete in the Eccellenza local championship.

Luciano Spalletti's men reached double figures, scoring ten without reply, and the club's record acquisition Victor Osimhen picked up where he left off last season with a goal in the 68th minute.

The Nigeria international has reported for pre-season training despite speculation linking him with a departure from The Azzurri.

Four goals by Napoli inside 38 minutes killed the game as a contest by the end of the first half as Rrahmani, Kvaratskhelia (2) and Anguissa got their names on the scoresheet.

Spalletti switched to a 4-2-3-1 formation at halftime, with Osimhen leading the attack.

The number 9 hit a first-time shot inside the area to make it 6-0 before goals from Politano (2) and Fellini (og) saw the Naples side go nine goals ahead after 86 minutes.

Ambrosino fluffed a penalty won by Osimhen at minute 91 but redeemed himself when he scored the game's final goal a minute later.