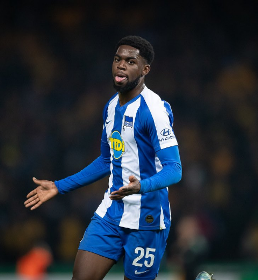 Nigeria Football Federation target Jordan Torunarigha is on the brink of completing a permanent transfer to Belgian Pro League side KAA Gent amid rumours linking him with a possible move to Premier League side West Ham United.

Sky Sport Germany reporter Florian Plettenberg informed this afternoon that the former Germany U21 international is set to move to KAA Gent and a medical has been booked for the central defender on Monday, July 18.

Per the report, Gent and Hertha Berlin have reached a club-to-club agreement for the transfer of Torunarigha.

News #Torunarigha: He is on verge to join KAA Gent on a permanent deal. Medical could take place on Monday. Transfer fee around €4.5m with possible bonus payments included. Talks about a contract until 2025. @SkySportDE 🇩🇪🇳🇬

Hertha Berlin will bag a transfer fee of 4.5 million euros with possible bonus payments included in the deal.

Plettenberg reported more than a month ago that West Ham United made enquiries over the availability of the German-Nigerian centre-back, but it appears the Hammers did not firm up their interest, with the 24-year-old poised to join Gent for a bargain fee.

The Hertha Berlin academy product is set to return to Gent for a second spell, having represented the East Flanders outfit in the second half of last season on loan, making fifteen appearances in all competitions.

Torunarigha, who has been on the books of Hertha Berlin since the age of nine, was on target against Salford City in a pre-season friendly staged at St. George’s Park on Saturday, heading in a free-kick in the 28th minute for the match-winning goal.