...the complete Nigerian football portal
Subscribe
Nigerian whizkid makes a splash at trials but Glasgow Rangers will not sign him this summer
Published: July 19, 2022 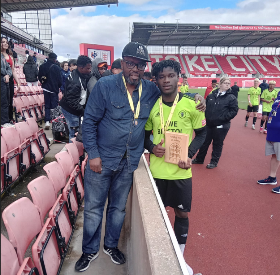 Nigeria underage international Thompson Ishaka was the star attraction at Glasgow Rangers B pre-season training with a string of brilliant performances for David McCallum's team.

The Light Blues have maintained a long-term interest in the talented teenage winger as he trained with the B team earlier in the year before he was invited again to take part in pre-season preparations.

Ishaka has wowed Rangers supporters with his displays, showing everyone that he has an eye for goal and a decisive pass.

The Riverlane Football Academy Enugu product finished pre-season as Rangers B top scorer with five goals, having netted a hat-trick in a 5-1 rout of Dundee, followed by strikes against Glentoran and MSK Zilina.

Allnigeriasoccer.com has been told that Rangers academy coaches were impressed with Ishaka's all-round display during the latest round of trials but the Scottish Premiership giants will not be signing him in the summer transfer window.

Contract talks have not taken place because Ishaka is still a minor and not permitted to sign a deal with a European club until November 2022 when he would have attained the age of majority.

Another obstacle Rangers are facing to sign Ishaka is that other top European clubs are keeping tabs on the Nigerian and are expected to make a move for him when he turns 18.