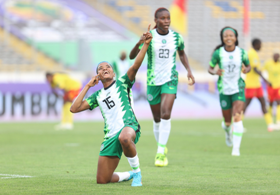 The Super Falcons earned a ticket to the FIFA World Cup finals even as the team failed to realize its ambition of a 10th triumph.

Atletico Madrid dazzler Ajibade found the net in the Super Falcons' opening match against South Africa, netted from the spot in a 4-0 rout of Burundi, before scoring an important winner in a 1-0 win vs Cameroon in the quarterfinals.

NFF General Secretary, Dr Mohammed Sanusi said in a press release: "We rejoice with Rahseedat Ajibade for her emergence as joint top-scorer of the tournament and we implore her to continue to show even more prolificity and commitment in the jerseys of club and country.

"Her three goals surely helped the Super Falcons to win a World Cup ticket. Our team would certainly have been in the Final if not for the incident that led to her expulsion in the semi final match against the host nation.

"She probably would have won the award outright if she finished the game and played one more match."

Ajibade was ejected after 70 minutes of the semi final against Morocco at the Complexe Prince Moulay Abdellah, with Nigeria already one woman down, and the Falcons played the next 50 minutes (of regulation and extra time) with only nine players, losing in the ensuing penalty shoot-out.

In the third-place match against Zambia on Friday, a fierce shot by Evarine Suzeni Katongo in the 28th minute struck the upright and bounced on the back of hardworking goalkeeper Chiamaka Nnadozie for the only goal of the match, with the Falcons failing to convert any of a slew of chances they created.