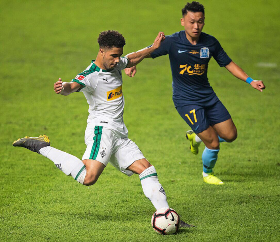 German 2. Bundesliga club SV Darmstadt 98 are running the rule over Tottenham Hotspur-reared winger Keanen Bennetts with a view to offering him a contract.

SV Darmstadt 98 informed this morning that Bennetts is training with the club this week.

Keanan #Bennetts is training with the club this week. #sv98 pic.twitter.com/83jQE2Gz2M

The Anglo-German-Nigerian winger is currently unemployed following the expiry of his contract with Borussia Mönchengladbach, whom he joined from Tottenham Hotspur in 2018.

Bennetts had been touted as one of the most exciting teenagers in English football and arrived at Borussia Mönchengladbach with high hopes but the move was not beneficial to both parties.

The 23-year-old made six career appearances for the five-time German top flight champions, and departed the club this summer without making his starting debut.

He spent the whole of the 2020-2021 campaign on loan at Ipswich Town, where he featured in 30 games and scored one goal.

Keanen Bennetts was a player of interest to former Flying Eagles manager Paul Aigbogun before the 2019 FIFA U20 World Cup in Poland but the winger rejected his advances because he wanted to concentrate on his career with Borussia Mönchengladbach.