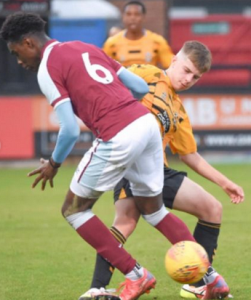 Allnigeriasoccer.com has been told that Scottish Premiership champions Celtic are on the verge of confirming the signing of versatile Nigerian central defender Justin Osagie.

Osagie is joining Celtic from West Ham United's Academy and will initially play for the youth team of the Hoops before making the step up if he impresses.

The 2005-born player has departed the Hammers after only one competitive appearance for their U18 team - against West Brom in the U18 Premier League back in February.

He had attracted interest from other London clubs namely Arsenal, Chelsea and Tottenham Hotspur but opted to join West Ham in 2020.

Osagie has been described as a versatile central defender who is good on the ball, has good technical ability, reads the game well, has an eye for a pass, quick and is comfortable playing as a central midfielder.

The 17-year-old links up with Tobi Oluwayemi, Bosun Lawal, Eseosa Sule and Osaze Urhoghide at Celtic.

Osagie was on the books of Southend United before joining West Ham United.