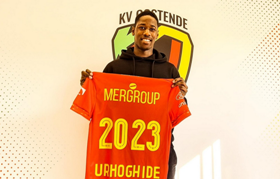 Through a statement on their official website, Belgian Pro League club K.V. Oostende have announced the signing of Rotterdam-born Nigerian centre-back Osaze Urhoghide.

Scottish Premiership champions Glasgow Celtic have loaned him out to Oostende for the whole of the 2022-2023 season, with an option to buy included in the deal.

The 2019 Nigeria U23 invitee is returning for a second spell at K.V. Oostende, having spent the second half of last season on loan at the club, making seven appearances in the league.

Manager Angelos Postecoglou has given the green light for Urhoghide to leave Celtic in search of regular game time after monitoring him during pre-season preparations.

Since the defender's celebrated move from Sheffield Wednesday last summer, he has struggled to break into the first team, making just one appearance against Real Betis in a dead rubber Europa League match back in December.

Commenting on the return of Urhoghide to Oostende, KVO chief Gauthier Ganaye said : "Osaze proved last season that he was an absolute added value in our team.

"We wanted to bind him to us for a longer period but at first we couldn't find an agreement with Celtic. Osaze himself, however, expressed his wish to return to KVO and we kept in touch with him and Celtic.

"This past week, the dossier gained momentum. Osaze is happy to be back here and we are very happy to have a strong defensive player in the team and someone who already knows the way the club and the trainer work. "

The 22-year-old Urhoghide played for the youth teams of CB Hounslow United and AFC Wimbledon in the past.