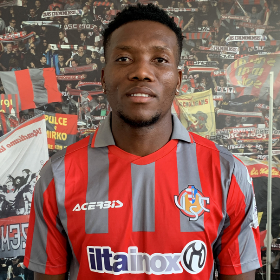 Through a press release published on their official website, Italian Serie A new boys U.S. Cremonese have announced that they have snapped up 2019 Super Eagles invitee David Okereke on a permanent deal from Club Brugge.

Okereke is returning to Italy, three years after he left Spezia to join Club Brugge for what was then a club record fee for a new arrival.

With the Belgian side, the 24-year-old won the Pro League title in back-to-back seasons and featured in the Champions League.

He departs Club Brugge after making seventy-one appearances in all competitions in which he registered fifteen goals and three assists.

A product of Football College Abuja in his native Nigeria, Okereke began his career in Europe at Lavagnese before joining Spezia, for whom he scored 11 goals in 59 games.

He impressed during a loan spell at Venezia in 2021-2022, notching seven goals in thirty-two games but could not prevent the club from being relegated to the second ter at the end of the season.

A former Nigeria U23 international, Okereke was invited to train with the Super Eagles by manager Gernot Rohr ahead of an international friendly against Egypt in March 2019 but was a non-playing substitute.