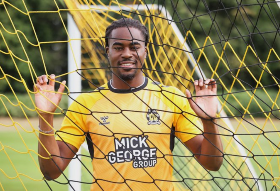 Through a statement on their official website, Cambridge United have announced the signing of former Arsenal schoolboy Fejiri Okenabirhie.

Okenabirhie has joined Cambridge United as a free agent following his release by another Football League club Doncaster Rovers, where he spent two years.

A onetime target of Nigeria Football Federation president Amaju Pinnick, Okenabirhie has put pen to paper on a one-year contract with United.

The 26-year-old missed the whole of the 2021-2022 season after suffering an Achilles tendon injury that required surgery.

On his curriculum vitae, he has also worn the colours of Stevenage, Harrow Borough, Dagenham & Redbridge  and Shrewsbury Town, and enjoyed loan spells at Bedford Town, Farnborough, Cambridge City and  Royston Town during his time at Stevenage.

"It feels really good. I am happy to be part of this Club and I am looking forward to a good season," Okenabirhie said to the official website of Cambridge United.

"I had a tough last season but I am here now with a fresh start and I look forward to getting back on the pitch and helping the team.

"From the outside the club has been on an upward curve for the past couple of years and everyone I spoke to only had good things to say about it."

Okenabirhie is familiar with the League One, netting 25 goals in 102 career appearances for Stevenage, Shrewsbury Town and Doncaster Rovers.