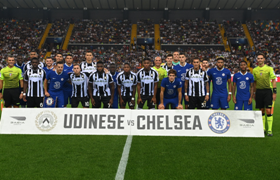 Chelsea concluded their pre-season schedule with a 2-0 win over Italian club Udinese in a behind-closed-doors friendly at the Dacia Arena on Saturday.

The Premier League side defeated the Bianconeri 3-1 in the first of the two friendlies on Friday, with three players of Nigerian descent on parade for Udinese including Super Eagles striker Isaac Success.

As expected, both coaches rotated their squads, allowing the fringe players get minutes ahead of the forthcoming season.

Udinese coach Sottil handed a start to Republic of Ireland youth international of Nigerian descent, Festy Ebosele and the right wingback went the distance, after playing for just three minutes in yesterday's friendly.

The 19-year-old Ebosele joined Udinese on a five-year deal in the summer after turning down a new contract at Derby County.

In a first half dominated by Chelsea, Thomas Tuchel's side took the lead through the impressive Ruben Loftus-Cheek, who chipped the goalkeeper from close range.

Playing as a right wingback, the England international played a part in Chelsea's second goal when he won a penalty converted by Hakim Ziyech with 55 minutes played.

Chelsea's first competitive game of the 2022-2023 season is against Everton at Goodison Park next Saturday, while Udinese host FeralpiSalò Srl in a Coppa Italia clash.