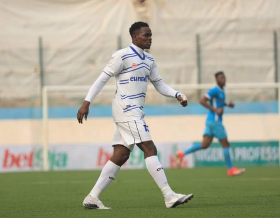 Allnigeriasoccer.com understands that the transfer of Nigeria international Rafiu Ishaq Kayode to Slovenian champions NK Maribor has crashed due to issues surrounding the player.

A few days after news of the purported transfer appeared online, Rivers United FC released a press release saying the winger was still legally contracted to them.

With that storm yet to calm, it emerged that the player was still contractually bound to a United Kingdom based agent but chose to sideline this agent and conclude the transfer to Slovenia through his local manager and some other agents.

The UK based agent then swiftly contacted his lawyers who wrote to NK Maribor and informed them that they had earlier issued an exclusive mandate to Maribor for the same player but the club and the player chose to engage in a clandestine alliance to sign a contract without the knowledge and participation of the player's exclusive intermediary and the only agent exclusively authorized to deal with the club regarding the player.

On receiving this letter, NK Maribor withdrew from the deal and urged the player to sort out his differences with his former club and his agent.

A source close to allnigeriasoccer.com revealed that the player is endangering his career by allowing his local manager misguide him into dumping his exclusive intermediary and the intermediary is a powerful player in the industry who has contacts that could ensure anywhere Ishaq goes it will be difficult for him to sign.

He also warned that European clubs are like a network and when one withdraws from a deal word gets out to others and its often difficult to break into the circle after such an encounter with a club.

The source advised Ishaq to find a way to make up with his intermediary to avoid jeopardizing his career.