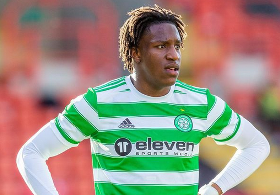 Talented Irish-Nigerian defender Bosun Lawal opened his season account for Celtic B as they were held by Spartans in an entertaining 2-2 draw at Ainslie Park, Edinburgh on Saturday.

The Republic of Ireland U21 international fired blanks in his first Lowland League game of the season, a 1-0 loss to English club Berwick Rangers on matchday two in the division.

Lawal side-footed into the bottom right corner to give Celtic the lead midway through the first half after a dangerous ball was intercepted into his path.

Cammy Russell equalised for the hosts from a free-kick in the 55th minute, Johnny Kenny restored the Hoops one-goal lead and Sean Brown's strike eight minutes from time made sure the points were shared.

Lawal was invited to train with the first team of the Hoops during their pre-season preparations and featured in some friendlies.

Should he remain at Celtic, the 19-year-old has been tipped to make his senior debut for the Scottish Premiership champions in 2022-2023 as he is one of the standout players in the B team.

Tobi Oluwayemi, younger brother of ex-Super Eagles invitee Joshua Oluwayemi, went the distance against Spartans and made a couple of saves during the game.