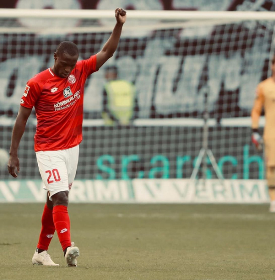 German sports magazine Kicker says Ujah is about to sign for Eintracht Braunschweig and the second tier side want to complete the transfer within this week.

The former Warri Wolves star is on the lookout for a new club after his contract with Union Berlin expired at the end of last month.

Ujah is a household name in German football, having played for Mainz, FC Cologne, Werder Bremen and Union Berlin in the Bundesliga.

The 31-year-old has experienced 2. Bundesliga football in the past, making 62 appearances and scoring 24 goals for Cologne.

Apart from the aforementioned clubs, Ujah lists Lillestrom and Liaoning Whowin among his previous employers.

He was a member of the Super Eagles squad to the 2013 FIFA Confederations Cup in Brazil, where he started in a 6-1 rout of Tahiti.

Ujah has not played for the national team since September 8, 2015 when he was in action for 54 minutes in a friendly against Niger.