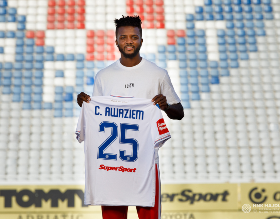 The Super Eagles defender will be spending the entirety of the 2022-2023 season on loan at HNK Hajduk Split with a purchase clause included in the deal.

Awaziem has had a nomadic career in the past few years having had stints at Portuguese side FC Porto, FC Nantes in the Ligue 1, Rizespor FC and Alanyaspor in the Turkish flight and Boavista in the Primeira Liga in Portugal.

The Nigeria international, who is adept at playing at both central defence and right back positions, was involved in 27 league games for his Boavista side in 2020-2021 and played just 18 league games for Alayanspor last season, starting seventeen of them.

In his first words as a player of Hajduk Split, Awaziem told the club's official website : "I know that Split is a beautiful city and that the fans are very passionate and love football.

"I also like football, so we are very similar in that. I came to Split to give my best and to fulfill our goals. "

A member of the Super Eagles squads to the 2019 and 2021 Africa Cup of Nations, Awaziem has been allocated the number 25 jersey at Hajduk Split.

Hajduk Split  won their first two league matches of the 2022-2023 season and face Portuguese setup Vitoria Guimaraes in the third qualifying round of the Europa Conference League on Thursday, August 4.