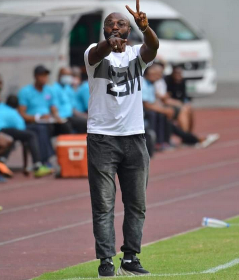 Former Super Eagles goalkeeper Imama Amapakabo has parted ways with Abia Warriors following the expiration of his contract, the Umuahia based club have informed via their official website.

The 1985 FIFA U16 World Championship-winning goalkeeper was in charge of Enugu Rangers when the Flying Antelopes won the Nigeria Professional Football League title in 2016 could not lead his team past Ottasolo FC in the Round of 64 of the 2022 Aiteo Cup.

Enugu Rangers Players who achieved that feat under Amapakabo recently vowed to protest the decision of the Enugu State Governor Ifeanyi Ugwuanyi not to deliver on that pledge.

The Management of Abia Warriors thanked the gaffer who also had stints with the home-based Super Eagles side and the Nigeria U-23 side that failed to qualify for the 2020 Olympic Games in Beijing for his time at the club.

Abia Warriors only survived from their relegation battles only on the last day of the season.

Media officer of the club, Chigozie Nwosu told the media that the termination of the contract was on mutual terms.