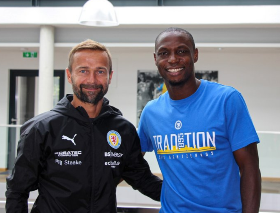 Through a statement on their official website, German 2. Bundesliga club Eintracht Braunschweig have confirmed the signing of Nigeria international Anthony Ujah.

The centre-forward joins from Union Berlin and has put pen to paper on a one-year contract until June 30, 2023 with an option for another season.

Eintracht Braunschweig are his fifth club since he first moved to Germany in 2011, having previously worn the colours of FSV Mainz 05, FC Köln, SV Werder Bremen and FC Union Berlin.

On his curriculum vitae, the 31-year-old has also represented Warri Wolves in his homeland, Lillestrom in Norway and Chinese club Liaoning FC.

Ujah has made 62 appearances in the 2. Bundesliga, scoring 24 goals, and notched thirty in 136 games in the Bundesliga.

In his first words as a player of Eintracht Braunschweig, Ujah said : "I am very happy to be part of Eintracht in the future. I know the 2nd Bundesliga and will try to help the team with my experience.

"I was rooting for the cup game at the airport in Nigeria on Sunday and I was really happy for the team."

Ujah has seven caps for the Super Eagles and represented the country at the 2013 Confederations Cup.