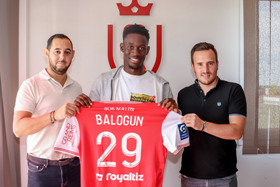 A statement from Stade de Reims official website has confirmed the signing of Arsenal-owned Anglo-Nigerian striker Folarin Balogun on a season-long loan deal.

The 21-year-old previously played at Middlesbrough on loan for five months where he performed admirably and scored three goals whilst assisting a further three.

Balogun is in search of regular first-team football which is unlikely to be on offer at Arsenal after the signing of Brazilian striker Gabriel Jesus and renewal of Eddie Nketiah's contract.

The Hale End Academy graduate is in good physical condition after participating in a full pre-season program with the Gunners and would be hoping to fill in for the now-departed Hugo Ekitike who swapped Reims for Paris Saint-Germain earlier.

Balogun still has three years to run on his current contract at Arsenal having signed a four-year extension in 2021 and is expected to return to the Emirates Stadium because no clause was inserted in his loan deal.

Balogun would provide top-notch quality to Reims attack with his high technical abilities, pace and guile on the ball.