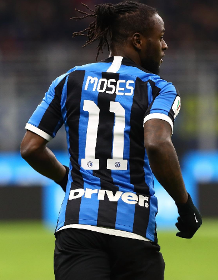 Former Spartak Moscow coach Massimo Carrera has named five Red and White players who have the ability to play for a club in the top five European Leagues comprising the English Premier League, German Bundesliga, La Liga, French Ligue 1 and Serie A.

2013 Africa Cup of Nations winner Victor Moses has made the cut along with Georgi Dzhikiyam, Aleksandr Sobolev, Christopher Martins and Quincy Promes.

The versatile winger has played in the final of the Europa League and won the Premier League with Chelsea in 2017.

Moses has had a brilliant start to the new Russian Premier League season, scoring two goals in three appearances.

"Which of the current Spartak players could play in the top 5 leagues in Europe? I think these are Dzhikiyam, Sobolev, Martins, Promes and Moses," Carrera said to RB Sport.

The 31-year-old Moses is credited with 220 appearances in the English Premier League and played twelve times for Inter Milan in the Serie A during the second half of the 2019-2020 season.