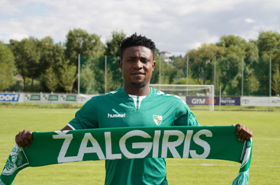 The right back has put pen to paper on contract until the end of the 2024 Lithuanian season.

Seth played for Supreme Court and Rhapsody academies in Nigeria, and left for Turkey in 2017.

During his time in Turkey, he wore the colours of Yeni Malatyaspor and Boluspor, making 42 appearances combined for both teams.

"First of all, I would like to thank God for this opportunity. When I arrived in Lithuania, I found many good football players who welcomed me kindly and made everything easier," Seth said to the official website of FK Kauno Žalgiris.

"During the year I spent in Turkey, I really learned a lot, I played at a high level, and my confidence in my abilities increased a lot. "

The 24-year-old Seth has already made his debut for FK Kauno Žalgiris, lasting seventy minutes on the pitch in a 2-2 draw with FK Suduva Marijampole on August 2.

The new FK Kauno Žalgiris number 18 participated in the 2016 Olympic Games in Rio de Janeiro, where he won bronze with the Dream Team VI.