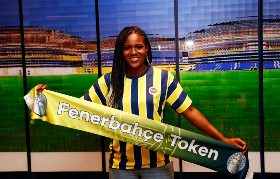 The length and financial terms of the contract signed by the striker have not been disclosed by the Yellow Canaries.

Born in Chicago, United States of America, George has been recruited from SC Sand, one of the German Frauen-Bundesliga teams last season.

Mustafa Kemal Danabas, Member of the Board of Directors responsible for Women's Football at Fenerbahce, was present at George's signing ceremony held at Ülker Stadium Fenerbahçe Şükrü Saracoğlu Sports Complex.

The 25-year-old made her Super Falcons debut in a friendly against Uzbekistan at the 2021 Turkish Women's Cup.

Prior to transferring to SC Sand, she wore the colours of Illinois Fighting Illini and Cloppenburg.

George was eligible to represent United States and Venezuela before committing her international future to nine-time African champions Nigeria.

Fenerbahce finished third in the Turkish top-flight in the 2021-2022 season.