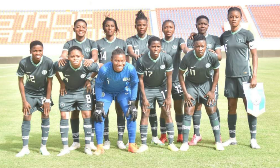 The Nigeria squad departed the shores of the country on Thursday evening for the tournament.

An analysis of the squad list revealed that three goalkeepers, six defenders, six midfielders and six strikers were on the plane to Costa Rica.

Nigeria will play France, Canada and Korea Republic in Group C of the 16-nation tournament starting on August 10.

Coach Chris Danjuma's team are aiming to win the FIFA U20 Women's World Cup final for the first time, having finished runners-up on two occasions (2010 and 2014) and were the fourth best team in 2012.

Oluwatosin Demehin will captain the Falconets during the nineteen-day tournament.

Nigeria are one of Africa's representatives after seeing off Central African Republic, Republic of Congo, Cameroon and Senegal in the qualifiers, winning six of seven matches.