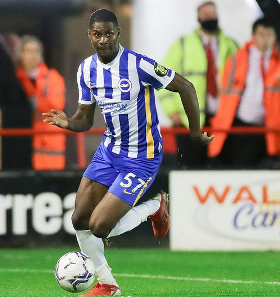 Offiah's availability for selection is doubtful as he has not been pictured training with the first team of the Seagulls in the most recent training images published by the club's official website.

Brighton & Hove U21s begin their own season with a trip to Crystal Palace, a day after the first team tackle Manchester United, and it is believed the Nigerian will be involved in some capacity against the Young Eagles.

Offiah trained with Brighton's first team for a portion of pre-season preparations and started their first friendly against Union Saint-Gilloise, but was not selected for their next four fixtures with Estoril, Reading, Brentford and Espanyol.

The 19-year-old is a player to keep an eye on in the new season and he is pushing for a first team place after impressing for the development squad.

Manager Graham Potter named Offiah in his match day squad in eight of the last nine games played by the Seagulls in the Premier League in 2021-2022.

The Flying Eagles-eligible centre-back made his debuts in the Emirates FA Cup and Carabao Cup last season.