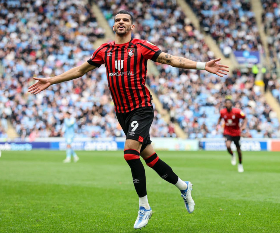 Premier League new boys Bournemouth have confirmed their squad numbers for the 2022-2023 season, a day before they take on Aston Villa in their opening game of the campaign.

Super Eagles-eligible striker Dominic Solanke will keep the number 9 jersey he has been wearing since the start of the 2019-2020 season.

The one-cap England international wore the number 29 at the back of his jersey when he initially joined the Cherries from Liverpool in January 2019.

Solanke was assigned the number 9 at Dutch club Vitesse Arnhem, wore the number 35 and 41 at Chelsea and was given the number 29 at Liverpool.

Promising Nigerian central midfielder Ferdinand Okoh, 18, has not been allocated a first team squad number which suggests that he will continue to play for Bournemouth's youth teams in the new season if he is not loaned out to continue his development.

Solanke recently committed his future to Bournemouth, signing a contract extension that will keep him at the Vitality Stadium until June 30, 2026.

The 24-year-old notched 29 goals and registered seven assists in 45 Championship appearances over the course of the 2021-2022 season.

He will be hoping to make his 64th career appearance in the Premier League against Aston Villa on Saturday afternoon.