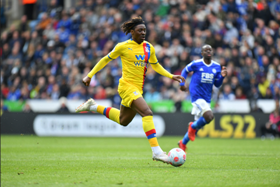 Nigeria Football Federation target Eberechi Eze on Friday evening received plaudits from two of the greatest players in the history of the Premier League ahead of the first game of the 2022 /2023 season at Selhurst Park.

Liverpool legend Michael Owen and Arsenal icon Ian Wright while analyzing Crystal Palace's chances against Arsenal in the season's opener, lauded the talents of the midfielder whom the Nigeria Football Federation President Amaju Melvin Pinnick approached in London few years ago over the possibility of playing for the country of his parents.

"What a player he is. He's so quick and can beat players. He could be close close to the England squad if he stays fit," Owen told Sky Sports presenter, Steve Bowyer while the footage of Eze's goals were played back on the studio's screen.

The comment about the Three Lions will not sit well with Nigerian football faithful who had hoped that the Super Eagles qualified for the 2022 FIFA World Cup to make the decision of Eze to change allegiance easier.

Wright who obviously leans towards an Arsenal win agrees with Owen.

"He can run with the ball. He can pass the ball, he will be vital to what Patrick Vieira is trying to do."

"What a player. He is so too-footed. He can beat players, he's so quick. He can run with the ball, pass the ball. He's so good," Wright said.

In the corresponding fixture between both sides in April this year, the Eagles defeated Mikel Arteta’s Arsenal 3-0.