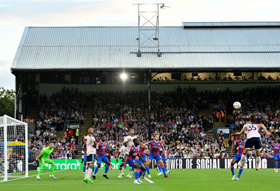 The long-awaited return of the Premier League featuring Mikel Arteta's Arsenal against Patrick Vieira's Crystal Palace ended in a  2-0 win for the Gunners.

Nigerian Federation target Eberechi Eze and 2019 Golden Eaglets invitee Malcolm Ebiowei were both in the Crystal Palace's match-day squad with the former starting while the latter had to settle for a place on the bench, however, Michael Olise missed the game through injury.

The game started in frantic fashion with Arsenal dominating the game and creating early chances with Brazilian winger Gabriel Martinelli missing a golden chance in the 4th minute.

Martinelli was able to get the Gunners off the mark with a headed goal in the 20th minute after new signing Oleksandr Zinchenko headed the ball back in the danger zone from a corner.

Palace grew into the game with Eze and Zaha proving to be a handful by combining beautifully on the left-hand side overwhelming Ben White who needed backup to keep the Eagles at bay.

The second half was all Palace as Vieira's men swarmed Arsenal and Eze particularly causing havoc between the lines.

However, the Anglo-Nigerian missed a golden opportunity to level the scores after his one-on-one shot was saved by Ramsdale in the 52nd minute.

Arsenal soaked up the pressure though and found a second goal to seal the win late on through Marc Guehi's own goal after Bukayo Saka's cross deflected off him into the net.

With four minutes left on the clock, Ebiowei came off the bench to replace Eze for his Premier League debut and showed his quick feet on several occasions.

He was however unable to take on Kieran Tierney as he would like due to Arsenal's defensive cover on the flank with Martinelli dropping behind.