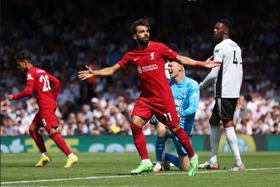 Another long-awaited game in the return of the Premier League featured Marco Silva's Fulham against Jürgen Klopp's juggernaut Liverpool team with the score ending in a 2-2 draw at Craven Cottage.

Nigeria-eligible central defender Tosin Adarabioyo put in a brilliant 90-minute shift for Fulham while Idris Odutayo was absent from the matchday squad.

The game started in a relaxed fashion as Liverpool looked to build patiently from the back while Fulham remained very compact, blocking every space available through the middle of the park inside the first ten minutes.

Fulham were also good in their build-up with Adarabioyo being central to that. The Anglo-Nigerian and his defensive partner Ream stepped out of the defence on several occasions, keeping close to the midfield and stuffing Liverpool's build-up.

However, Liverpool's famous press began to come together and the defenders were forced to go long with a turnover almost falling to the head of Mohamed Salah in the 21st minute.

Fulham kept Liverpool at bay and after Henderson went down holding his ankle, the Cottagers broke clear down the right side.

Kebano kept himself onside, and fed Tete on the overlap, who chipped the ball into the box where Mitrovic crashed in a textbook centre-forwards header past Alisson and into the net in the 32nd minute.

Diaz started to come lively on the flank but on the few occasions where he managed to skip the full-back, Ream and Adarabioyo were on hand to pressurize him into less-effective danger zones.

Liverpool then tried to impose their quality but Fulham sinked deeper into their half and managed the game until the halftime whilst blew with their 1-0 lead intact.

The second half started in similar fashion, with Liverpool trying to build patiently and Fulham blocking all passing lanes and winning the ball back in midfield with one such move needing a decisive intervention from Matip to prevent another dangerous area ball into the area in the 47th minute.

Adarabioyo got lucky in the 61st minute as he was caught on the ball in Fulham's build-up, however, Nunez took a bad decision when he tried to square the ball instead of taking a pop on goal.

Liverpool equalised in the 64th minute through Nunez after some great interchange passes from Henderson and Elliot in the midfield resulted in Salah rolling the ball across the 18-yard-box.

Adarabioyo got a touch but the ball bounced off him into the path of Nunez.

Against the run of play, Mitrovic converted a penalty he won himself after Dutch defender Van Dijk tripped him in the 18-yard-box to restore Fulham's lead in the 72nd  minute.

Liverpool equalised again in the 80th minute through Salah who finished from Nunez' pass after Alexander-Arnold's cross caused havoc in Fulham's penalty area.

The final whistle blew as Fulham contained Liverpool's attack with the Reds ramping up the pressure in the closing stages.