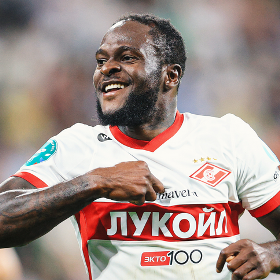 Russian Premier League club Spartak Moscow have confirmed through their official website that Victor Moses will be out of action for six months after suffering an Achilles tendon injury during the club's 2-0 win against Ural on matchday four in the Russian Premier League on Saturday, August 6.

Just past the half hour mark, the former Chelsea winger made no contact with an opponent before he hit the turf and couldn't get up on his own.

Moses was stretchered off the pitch and left the stadium in Yekaterinburg on crutches and his right leg was in a brace.

The 2013 Africa Cup of Nations winner has undergone a medical examination ahead of surgery.

"The Nigerian has been diagnosed with an Achilles tendon injury. The player will have to undergo surgery," Spartak Moscow said in a statement on Monday morning.

"It will take about six months to recover from the injury. We wish Viktor a speedy return to the field!"

Moses's injury absence is a big blow to Spartak Moscow as he has been their standout player in the new season, netting two goals in three matches before the trip to Yekaterinburg.

If the prognosis by Spartak Moscow comes true, the 31-year-old looks set to be unavailable for selection for thirteen league matches.