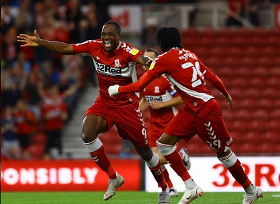 Sky Sports Transfer Centre reported on Monday that Konyaspor have made an official offer to sign Middlesbrough forward Ikpeazu.

Ikpeazu was not called up for Boro's first two games of the season, against West Brom and Queens Park Rangers, an indication that he is not in the plans of manager Chris Wilder.

Konyaspor have proposed signing Ikpeazu on a free transfer with a twenty percent sell-on clause inserted into the agreement.

The 27-year-old spent the second half of last season on loan at Cardiff City, where he scored three goals in thirteen appearances.

He has found game time hard to come by at Middlesbrough since Neil Warnock, the manager that brought him to the club, was sacked last November.

Ikpeazu, if signed by Konyaspor, could be featuring in the Europa Conference League if the Turkish club make it to the group stage of the competition.