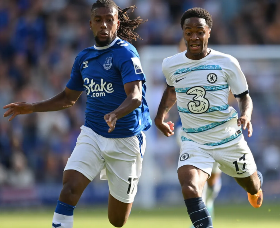 Everton and Nigeria midfielder Alex Iwobi has spoken about the positive impacts that manager Frank Lampard and new signing James Tarkowski had on him as he produced a sterling performance against Chelsea at the Goodison Park on Saturday evening.

Iwobi played for 90 minutes in his club's first game of the 2022 /2023 Premier League season and delivered the goods despite the 1-0 defeat the Toffees suffered thanks to a Jorginho penalty.

Iwobi's range of passes was worthy of note as he completed more passes than his teammates - 38 in total which was 81.9% accurate.

The Nigerian also created two clear cut scoring chances and had 47 touches if the ball. He made two interceptions, three clearances and committed one foul as shown by Whoscored.com's statistical analysis.

"I had a meeting with the manager before the game who told me – especially when we are going on the attack – that I should look around and be aware of my surroundings," Iwobi told Everton’s official website.

"The gaffer is always talking to me, motivating me and telling me to go out and express myself, kick on from last season, and I feel like I’ve done that so far. But it’s a long season, it’s a marathon, and there’s a long way to go."

"He’s a giant at the back, he’s a monster," the Nigerian eulogized.

"You feel very safe and secure with him, and nothing goes past him. For me playing in front of him, he’s always talking to me, always helping me to be in the right positions.

"He’s good for me, good for the team, has a lot of experience. It was a solid performance from him," Iwobi further said.

Everton’s next Premier League game is a trip on Saturday away to Villa Park against Aston Villa coached by former Liverpool star Steven Gerrard.