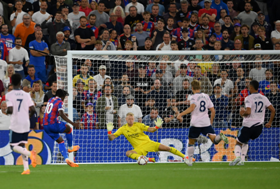 Ikpeba speaking on the first edition of Monday Night Football also was critical of Nigeria Football Federation target Eberechi Eze for missing the chance to equalise for the Eagle when Arsenal were 1-0 up in the game.

"An own goal by Guehi from Bukayo Saka's cross. I think they (Arsenal) worked hard to pick the maximum points on Friday," Ikpeba said.

"I think credit should go to Crystal Palace in certain moments of the game. (Eberechi) Eze had a one-on-one chance to equalise against Aaron Ramsdale. I think what was lacking from this Crystal Palace side was goals.

Ikpeba expressed shock that Manchester City had to let striker Gabriel Jesus to leave for Arsenal and insists that while the Gunners are now stronger offensively, they have to improve on defence.

"Arsenal bought well. Zinchenko from City. I'm still surprised that Jesus was allowed to leave City.  Defensively they have to improve because in certain moments of the game, they were fragile. They showed some strength offensively," Ikepba reiterated.

Arsenal's next Premier League game is a 3pm kick off against Leicester City on Saturday afternoon.