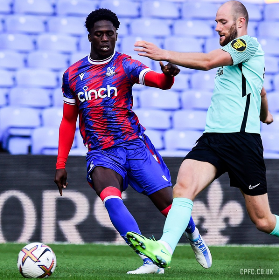 Three days after making his Premier League debut against Arsenal, 2019 Nigeria U17 invitee Malcolm Ebiowei was on U21 duties for Crystal Palace in their opening match of the Premier League 2 season against Brighton & Hove.

Ebiowei was not the only player of Nigerian descent on parade at Selhurst Park as he was joined in the starting lineup by Anglo-Canadian-Nigerian goalkeeper Owen Goodman, while central defender Odel Offiah came off the bench for the Seagulls in the 68th minute.

Jean-Philippe Mateta, one of six first teamers involved for the London club,  opened the scoring in the eighth minute with a scuffed effort into the corner, but Brighton equalised almost immediately through Evan Ferguson, whose powerful shot beat Goodman.

Palace were back in front in the 38th minute when the unmarked Ebiowei fired a shot into the bottom corner - his first goal for a Palace side following his summer arrival from Derby County.

After Mateta scored again to give Crystal Palace a 3-1 lead, Andy Moran pulled another goal back for the visitors.

Brighton & Hove came close to grabbing an equaliser through Offiah who saw his shot come back off the bar in the 87th minute.