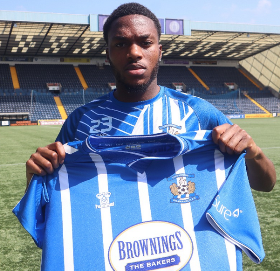 The Irish-Nigerian youngster has joined Kilmarnock on a season-long loan from French Ligue 1 club OGC Nice.

Sotona began his career at Irish club Mullingar Athletic before moving to Manchester United where he registered as the fastest player at the club.

The 19-year-old is making an immediate return to British football after spending the second half of last season at Brentford, where he played for their B team.

In eleven appearances for The Bees, he found the net once before returning to his parent club OGC Nice.

In his first words as a player of Kilmarnock, Sotona stated : "It feels great to be here, I can’t wait to get started, I’d been waiting a while to get out on this loan and this should be a very good move

"I want to showcase my talent and get game time here, I spoke to the manager and he’s given me the opportunity to come here and play first team football and I believe Kilmarnock will be a good club to play for.

"I’m a hard working player, I like to get goals and be direct, I like to win. I can’t wait to get started."

Sotona links up with another player of Nigerian descent, Arsenal-owned defender Ryan Alebiosu, at Kilmarnock.