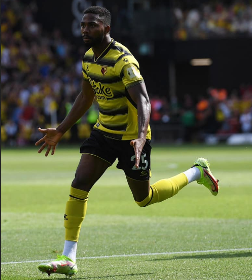 Watford coach Rob Edwards has revealed who the designated penalty taker is at the Hornets following the incident that happened in the second half of the Championship clash against West Brom at The Hawthorns on Monday night.

Ismaila Sarr, with a spectacular finish from inside his own half, opened the scoring for the Hornets in the 12th minute, but his goal was canceled out by Karlan Grant just before half-time.

With eighteen minutes left on the clock, a poor back pass allowed Sarr to run into the box and the referee pointed to the penalty spot after the Senegalese was brought down by Super Eagles defender Semi Ajayi.

When presented with the chance to score the winner from the spot, Sarr saw his low shot saved by the Baggies goalkeeper.

There was drama before the kick was taken as Emmanuel Dennis tried to grab the ball to take the penalty which may have hindered Sarr from scoring.

Speaking post-match, Edwards made it clear that Sarr is the club's designated penalty taker.

In quotes relayed by The Athletic UK (subscription required), Edwards stated : "Isma was on penalties, which everyone knew and was very clear".

Dennis scored his first goal for the Super Eagles in a 10-0 win over São Tomé and Príncipe on June 13, converting from the spot in the second minute of stoppage time.