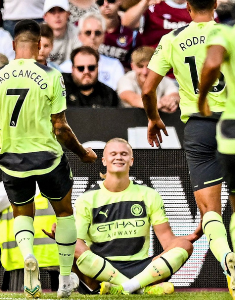 City began the defence of their title on Sunday evening with a 2-0 win over West Ham, with Haaland scoring both goals to start the campaign on a bright note.

Speaking on Monday Night Football, Ikpeba who played for Haaland's former German Bundesliga side, Borussia Dortmund had this to say.

"Haaland is the missing link for City. It's not as if City cannot dominate teams without Haaland but I think Haaland is so important when it comes to the Champions League," the 1997 African Footballer of the Year winner said.

"City have struggled sometimes in the semifinals and finals of the Champions League without an outright striker. They have laboured in that position.

"What Haaland brings is the threat from those crosses, dead ball situations," Ikpeba stressed.

Speaking on the similarities between both sides, Ikpeba sees a striking semblance of styles.

"I think Borussia Dortmund play similar football to Man City - a lot of movements for the attacking players upfront.

"They are teams that traditionally dominate the middle of the pack, play out from the back and you need a striker upfront, the likes of Raheem Sterling (before his move to Chelsea), Mahrez, Grealish and Foden.

Ikpeba who was affectionately called the 'Prince of Monaco' in his playing days thumbed up the striker for his positional play.

"Haaland did that (good positioning) compared with the Community Shield game against Liverpool. He had more movement in this game against West Ham. He has to adapt, the other players need to adapt with him because he's dangerous when you put those passes behind the defence," the former Nigeria youth international stated.