Super Eagles defender Leon Balogun was present in the stands as Rangers clashed with Union Saint-Gilloise on Tuesday evening in a UUEFA Champions League third round qualifier.

After falling behind 2-0 in the first leg, the team led by Giovanni van Bronckhorst clinched a place in the playoffs after battling back to win the contest 3-2 on aggregate.

In a pulsating game, James Tavernier, Antonio Colak and Malik Tillman each netted a goal to secure the 3-0 victory for the Gers.

Posting on his Instagram story, the 34-year-old showed his love for the club even though he is no longer an employee after being released earlier this summer upon the expiration of his contract in a shock move by the club hierarchy. 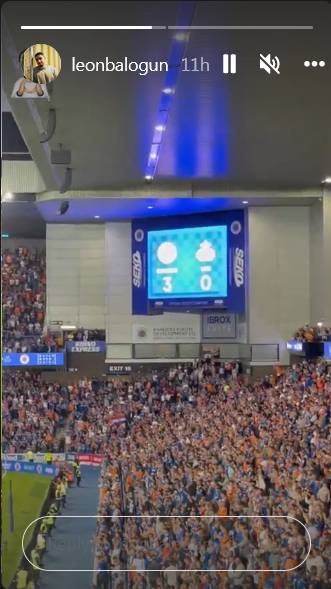 The centre-back signed for Rangers on a one-year contract in the summer of 2020 and signed an extension the following year after impressing as the club won the Scottish Premiership.

In his two-year stay at the Light Blues, Balogun made sixty-five total appearances with ninteen of those coming in European competition.

He made a total of five goal contributions which includes two goals and three assists. After his departure from Scotland, the German-born defender is still a free agent.