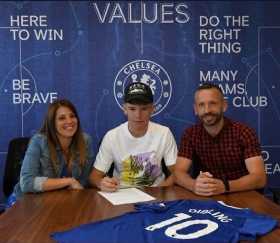 Southampton attacking midfielder Tyler Dibling has taken to social media to confirm that he has completed his transfer to Chelsea.

The 2006-born player has signed a scholarship deal with the Blues and becomes the seventeenth first-year scholar to join Ed Brand's Chelsea U18s in the new season.

Nigeria-eligible youngsters Chinonso Chibueze and Somto Boniface are part of the new intake of Chelsea Academy scholars for the 2022-2023 season.

The highly-rated midfielder received one call-up for a Premier League game last season, against Brentford in May 2022.

Writing on Instagram, Dibling said : "Just want to say a massive thank you to all the staff and players @southamptonfc for these last 10 years at the club.

"I’m forever grateful for the opportunities that have been handed to me and wish the club all the best. I’m excited to join @chelseafc and can’t wait to get started!"

Dibling, who was on target against the Young Blues in last season's U17 Premier League Cup, has represented England at U16 level.