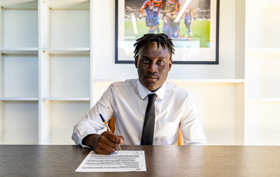 Through their official website, English Premier League club Crystal Palace have announced that David Ozoh has signed his first professional contract with the club.

The Anglo-Spanish-Nigerian starlet was offered a new deal after impressing for the youth teams of the Eagles.

Last season, Ozoh registered twenty-eight appearances for Crystal Palace U18s in all competitions and appeared in three matches for the development squad.

The promising teenager, who was born in Valencia, was named in Palace's 2022-2023 pre-season tour squad in Australia and Singapore, featuring in matches against Premier League giants Manchester United and Liverpool.

Ozoh joined the Selhurst Park outfit at the age of eight and was originally an attacking player before he was converted into a midfielder.

Speaking after putting pen to paper, he told Palace's official website : "It’s a dream come true to finally put pen to paper on this pro deal.

"I’ve been dreaming of this since I was a little kid and to have finally done it is a great thing. It’s onwards and upwards from here."