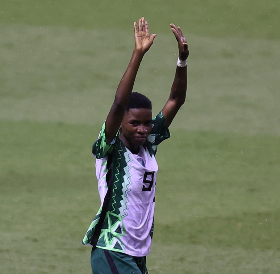 Nigeria's Falconets on Friday morning defeated France 1-0 to begin their 2022 FIFA U-20 Women’s World Cup in Costa on a good note.

Game of Many Parts

Before the game was halted due to bad weather, it was the Super Falconets that dominated proceedings.

After the interlude, France momentarily took the the initiative but the Nigerians recovered and finished strongly.

Demehin Is A Diamond In the Making

Captain Blessing Demehin was imperious in central defence and made several clearances, blocks and interceptions.

She was calm under pressure never let the yellow card she bagged in the game faze her. Showed maturity and leadership qualities.

There were many times that the Falconets lost possessions of the ball and were not assertive.

Les Bleuettes  seemed to have the edge as at th time they 'scored' the goal that was eventually ruled out.

Christopher Danjuma's girls however recovered and saw out the game.

Sabastine A Star In the Making Too

Nigeria's top scorer in the qualifiers Flourish Sabastine was indeed keen to flourish in the game and proved what a time she is.

Aside her lovely goal, her deft touches and runs off the shoulders of defenders were indications of what is to come from her.

The weather affected the flow of the game and it was apparent that the passes that went astray were sometimes as a result of the conditions of the pitch.