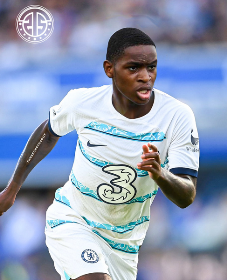 Premier League giants Chelsea are considering a move for England U18 international of Nigerian descent Princewill Ehibhatiomhan, according to reports.

The well-informed Twitter account Secret Scout has tweeted that The Blues have taken Reading's England U18 international Ehibhatiomhan on trial with a view to a transfer.

The information has been confirmed by Chelsea Insider Chelsea Youth who added that the Anglo-Nigerian has been trialing at Chelsea for most of the pre-season and scored in a friendly against Coventry City youth team a few weeks earlier.

He also scored in the pre-season game against Coventry a few weeks earlier, has been in for most of the pre-season. https://t.co/tRAxp1VwJE

Ehibhatiomhan has been offered fresh terms to extend his stay at Reading but he sees his future elsewhere.

Princewill is the younger brother of Reading academy product Kelvin Ehibhatiomhan, who was on target for the Royals in their recent Carabao Cup defeat to Stevenage.

Princewill has proved his goalscoring credentials in the U18 Premier League with seven goals in fourteen matches over the course of last season and has debuted in the Premier League 2 and FA Youth Cup.

Chelsea U18s begin the new season with a London derby against Arsenal in the U18 Premier League on Saturday, August 13.