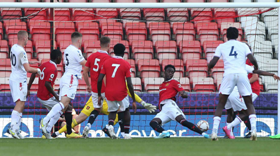 Manchester United are still searching for their first win of the new Premier League 2 season following a 5-1 defeat suffered at the hands of Crystal Palace at Leigh Sports Village on Friday evening.

Despite being spotted training with the first team earlier this week, England U19 international of Nigerian descent, Shola Shoretire has emerged as a doubt to be included in the traveling squad to London for tomorrow's Premier League clash against Brentford.

The Anglo-Nigerian winger started and was in action for 66 minutes for the Red Devils development squad against Crystal Palace.

Fresh from signing his first professional contract with Palace, David Ozoh made his first appearance of the new season, starting along with two other players of Nigerian descent in goalkeeper Owen Goodman and David Omilabu, while Victor Akinwale and Ademola Ola-Adebomi came off the bench in the second half.

Omilabu gave Crystal Palace an early lead in the sixth minute and then John Gordon doubled the advantage before Charlie Savage pulled one back in the 45th minute.

Crystal Palace struck three more times in the second half to seal a comprehensive win over their illustrious rivals.

Omilabu was unfortunate not to score his second goal of the game in the second half as he saw his effort hit the crossbar in the 70th minute.

The 19-year-old was named Crystal Palace U18s Player of the Season for 2020-2021 after a sensational campaign that saw him score 23 goals for the youth teams.