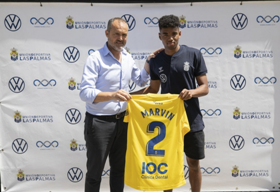 Akinlabi, also known as Park in Spanish football circles, will be spending the entirety of the 2022-2023 season on loan at Las Palmas, who have included an option to buy the versatile defender permanently next summer.

The former Spain U19 international has been described as a player that can provide speed, technical quality and range from his natural position as an attacking right back, although he could also play as a right or left winger.

Akinlabi was presented to the media and supporters of Las Palmas this afternoon at the Ciudad Deportiva de Barranco Seco.

Speaking at his unveiling ceremony, Akinlabi was quoted as saying by Las Palmas' official webpage :"I'm very excited about this project, it's a historic team and I'm really looking forward to it. I fit in well with the style of play and I can contribute defensively and offensively".

"I have seen Las Palmas games and they have a good style. With Viera I can get along very well.

"I've been training and I'm ready to play, it will be the coach's decision. In Madrid I learned a lot with Raúl González. Among other things, to work hard in any action and fight even for the last ball."

Akinlabi joined Real Madrid in summer of 2016, starting off with their Juvenil C and rose through the ranks before making his senior debut in a La Liga clash against Real Sociedad in September 2020.